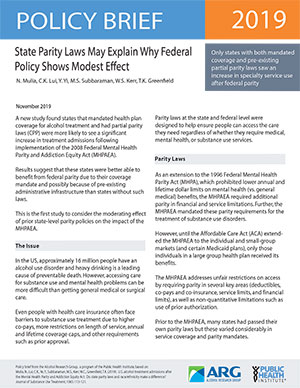 The purpose of this policy brief is to assess the effectiveness of the 2008 Federal Mental Health Parity and Addiction Equity Act (MHPAEA) on treatment admissions for people with substance use issues.

This is the first assessment to consider the moderating effect of pre-existing parity state laws.

Results showed no significant change in US alcohol treatment rates after the MHPAEA. However, when including the local parity laws, states with coverage and partial parity (CPP) saw a significant increase in treatment admissions.

This suggests the importance of mandates that require coverage and parity for substance use disorder treatment.

In the US, approximately 16 million people have an alcohol use disorder and heavy drinking is a leading cause of preventable death. However, accessing care for substance use and mental health problems can be more difficult than getting general medical or surgical care. Even people with health care insurance often face barriers to substance use treatment due to higher co-pays, more restrictions on length of service, annual and lifetime coverage caps, and other requirements such as prior approval. Parity laws at the state and federal level were designed to help ensure people can access the care they need regardless of whether they require medical, mental health, or substance use services.

As an extension to the 1996 Federal Mental Health Parity Act (MHPA), which prohibited lower annual and lifetime dollar limits on mental health (vs. general medical) benefits, the MHPAEA required additional parity in financial and service limitations. Further, the MHPAEA mandated these parity requirements for the treatment of substance use disorders.

However, until the Affordable Care Act (ACA) extended the MHPAEA to the individual and small-group markets (and certain Medicaid plans), only those individuals in a large group health plan received its benefits.

The MHPAEA addresses unfair restrictions on access by requiring parity in several key areas (deductibles, co-pays and co-insurance, service limits, and financial limits), as well as non-quantitative limitations such as use of prior authorization.

Prior to the MHPAEA, many states had passed their own parity laws but these varied considerably in service coverage and parity mandates. It is expected that these local laws could lessen the impact of the federal law since people already had greater access to substance use treatment.

The study looked at whether alcohol treatment admissions increased after federal parity was implemented, and whether this depended upon state laws. Researchers analyzed alcohol admissions data from SAMSHA’s Treatment Episode Data Set (TEDS-A) over a 15-year period from 1999 to 2013. Data included two million alcohol-related treatment admissions per year across 45 states and the District of Columbia.

Using data from the Alcohol Policy Information System (APIS) of the National Institute on Alcohol Abuse and Alcoholism, states were divided into five categories based on their coverage and parity policies prior to the MHPAEA.

What the Study Found

Overall, there was no significant change in US alcohol treatment rates after the MHPAEA. However, when considering the local parity laws, the MHPAEA impacted CPP states which saw a significant increase in alcohol treatment admission rates. This may be due to these states requiring coverage of alcohol treatment and also having the experience and administrative infrastructure to support parity. This could have enabled them to implement and benefit from the federal law more quickly than states with weaker or no prior parity laws.

This graph shows the different trends in weak, CPP and strong states. Before the MHPAEA was enacted in 2008, CPP and weak states had similar alcohol treatment admission rates, both of which were lower than those in strong states. After the MHPAEA, the treatment admissions rate in CPP states deviated from weak states, increasing to become similar to that of states with strong pre-existing parity.

Researchers also looked at how the MHPAEA impacted different racial and ethnic groups. While broad-based public health interventions may have a positive effect on the overall population, they may inadvertently introduce or exacerbate health inequities for subpopulations. Results were consistent with overall findings, with significant increases in CPP states that were similar in size across whites, blacks, and Hispanics.

The fact that strong states and CPP states, after the MHPAEA was enacted, had higher admission rates than weak states suggests the importance of the ACA’s provisions for alcohol treatment services. Namely, providing this as an essential health benefit and extending parity laws to many more Americans will help ensure people receive the care they need.

It also suggests what could happen if these ACA provisions for substance use disorder treatment were dismantled – it could affect treatment access for millions of Americans and have long-term detrimental effects on the public’s health.

Future research should determine if these treatment rates are maintained over time following the implementation of key ACA mandates. Research is also needed to assess the ACA and federal parity’s effect on treatment access across racial/ethnic groups to ensure that landmark public policies support and help facilitate health equity for all Americans.