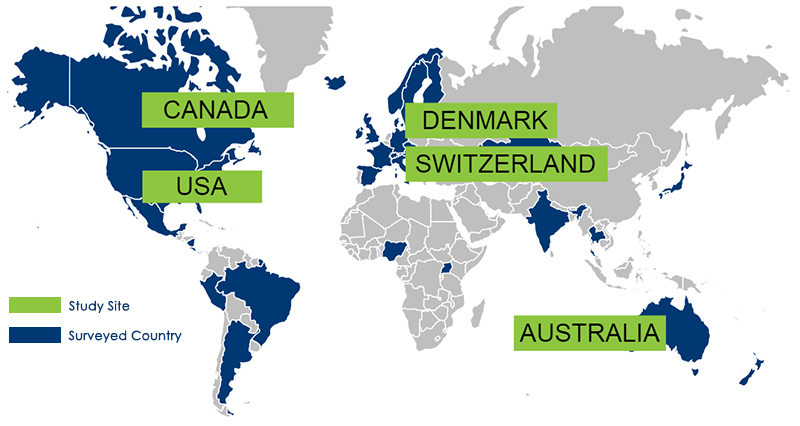 After five-years of data analyses, the GENAHTO (Gender and Alcohol’s Harms to Others) project wrapped up this year after producing a broad range of critical outcomes, including 26 published studies from across the globe. As the first multinational project to assess the extend and impacts of alcohol’s secondhand harms, it provided new insights into how different social and cultural contexts and alcohol-related policies affect or mitigate such alcohol harms to others.

By studying how individual, social, and economic influences within regions and societies may affect heavy drinkers’ harms to families (including partners and children), friends, and strangers, the research informs prevention planning and alcohol policy development in varying cultural contexts.

The project was funded by the U.S. National Institute on Alcohol Abuse and Alcoholism (NIAAA) under grant number R01AA023870 and involves collaborators at five study sites and an international team of scientists representing 36 countries.

Led by ARG scientific director and senior scientist Thomas K. Greenfield, with professors Sharon Wilsnack of the University of North Dakota, School of Medicine & Health Sciences, and Kim Bloomfield of Aarhus University, Centre for Alcohol and Drug Research, Denmark,  the international team assessed data that represented experiences of both victims and perpetrators in 36 countries.

The team combined surveys from 21 countries of the Gender, Alcohol and Culture: An International Study (the GENAHTO Project), including the WHO-Thai Health supported studies, and a survey conducted in the US, with survey data gathered earlier in the GENACIS project, which had involved many of the same investigators.

The countries and regions surveyed represented a wide range of alcohol policies, drinking cultures, and varied in socioeconomic conditions, including income and gender inequalities. Within a multilevel social ecological framework, the data were used to look at individual and contextual factors associated with people who experienced harms from someone else’s drinking (“victims”) and people who caused harms because of their own drinking, so called “perpetrators”. The project also assessed regional differences within and between countries that may help modify risks, including variations in drinking cultures and alcohol policies that prevent or promote secondhand harms.

Who is Affected & Types of Harms

An analysis of U.S. national survey data found 21% of women and 23% of men, an estimated 53 million adults, experienced harm because of someone else’s drinking. These harms were threats or harassment, ruined property or vandalism, physical aggression, harms related to driving, or financial or family problems (including alcohol’s harms to partners and children).

Respondents’ own heavy drinking and having a heavy drinker in the household increased risk for all types of harms. Physical aggression from others’ drinking was particularly elevated for heavy-drinking women.

Other multinational studies looked in depth at harms to children such as physical harm, neglect, and exposure to family violence due to others’ drinking and found rates differed by country. Alcohol-related harms to children were demographically widespread and greater in families with heavy drinkers with the proportion of children affected ranging from 4% to 14% of respondents, across countries.

In many countries, workers were negatively affected by a co-worker’s drinking, ranging from 1% of respondents in New Zealand to 16% in Thailand. Harms included having to work extra hours, loss of productivity, and accidents on the job.

Related Article: Alcohol Causes Significant Harm to Those Other than the Drinker

Men who experienced secondhand harms from alcohol were often perpetrated by strangers and acquaintances, whereas women’s harms were more often the result of drinking by intimate others such as partners and family members.

Other harms women experienced included negative mental health and lower quality of life. The number of women who reported having a harmful heavy drinking partner varied by country and region, ranging from 4% to 33%. A U.S. state analysis found that harmful effects of male binge drinking may be intensified by state-level gender inequality resulting in worse outcomes for women and children in the household.

A 12-country study found that comprehensive penalties such as community service, detentions, fines, ignition interlocks, license suspension, mandatory alcohol treatment, vehicle impoundment, and penalty point systems were associated with significantly lower rates of riding with an intoxicated driver and having a vehicular crash due to someone else’s drinking.

In a US study, results showed that the restrictiveness of a state’s alcohol policy was associated with lower levels of aggression harms and reduced vehicular harms due to other drinkers, while family and financial harms from other drinkers were not linked to alcohol control policies.

Related Article: Stricter Policies Lower the Risk of Being Hurt by Someone Who’s Been Drinking

From the extensive scope of the GENAHTO project, the research team strongly supports a public health approach to address alcohol’s harms to others, including environmental interventions such as alcohol tax increases and reducing availability, both of which have shown to decrease excessive drinking and reduce harms to people other than the drinker.

There also needs to be a focus on preventing intimate partner violence due to alcohol use; secondhand harms experienced by women are often more extensive and far-reaching, and include negative mental health and lower quality of life. Such harms could be mitigated by broad alcohol control policies at the local and national level but may also need other prevention strategies reching the families with heavy drinkers.

Wilsnack, S.C., Greenfield, T.K., Bloomfield, K.A., (2018c). The GENAHTO Project (Gender and Alcohol’s Harm to Others): design and methods for a multinational study of alcohol’s harm to persons other than the drinker. Int J Alcohol Drug Res 7, 37-47.