What is an SLH?

The purpose of sober living houses (SLHs) is to provide a safe, supportive, and affordable housing option to those in recovery. Sober living houses have been used as aftercare placements for clients completing residential treatment, places for clients to live while attending outpatient treatment, or as stand-alone approaches for substance misuse problems. The houses are funded through resident fees, come in a variety of sizes, and are located throughout neighborhoods that allow prospective residents to also consider location in choosing their SLH setting.

A central objective of SLHs  is to provide a positive living environment that reduces exposure to relapse triggers.  People at SLHs are able to craft a life that supports their recovery efforts. Each house maintains a communal recovery environment which includes abstinence from drugs and alcohol, peer support, and  typically require attendance to self-help groups, such as Alcoholics Anonymous. No formal treatment services are offered on-site, but individuals are expected to work towards constructing a life that supports long-term recovery and assists informally toward  recovery goals. Rather than being run by formal treatment providers, SLHs are and typically overseen by a house manager or a group of senior residents. Residents are surrounded by others in recovery that “get it.”  Residents can stay as long as they need with the abstinence-based housing model providing a critical support system.

What is the history of SLHs?

Similar to how the 12-step movement was created by people in recovery from addiction, sober living homes were started by those in recovery who wanted to bridge the gap between intensive, early recovery and sustainable, long-term recovery. This need grew out of the vacuum created by medical and housing policies that treated addiction as an acute, short-term problem and ignored housing obstacles for those in early stages of recovery. As treatment for addiction shifted from state institutions to community-based care when psychiatric populations were deinstitutionalized, the need for housing for those in recovery was addressed by the SLH movement in California in the 1970s. Instead of utilizing an acute treatment model that views addiction as “treated” or “cured” after a short stay at an inpatient program, SLHs provide long-term recovery while living and working in the community.

As the recovery community has moved towards a continuum of care model that addresses the needs of those struggling with addiction throughout all stages of recovery, SLHs were adopted as an option in this model for those in the recovery phase after acute care and transitioning to long-term recovery. 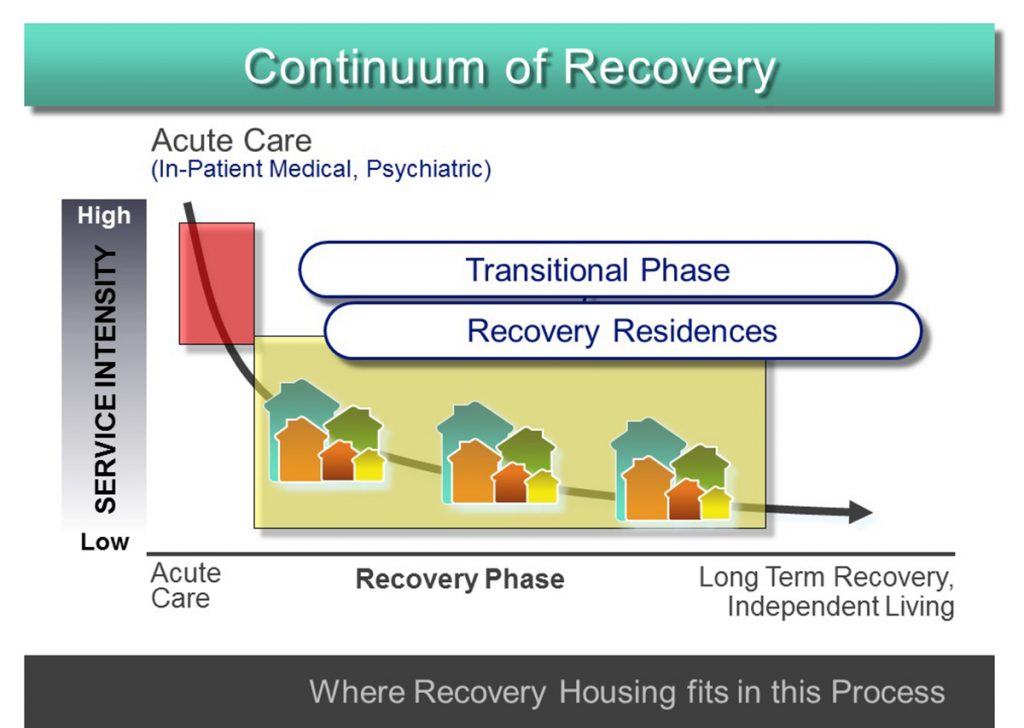 What research has been conducted on SLHs?

Since this addiction recovery housing option did not emerge as an evidence-based treatment option by clinicians and exists outside the licensed treatment system, little research has been conducted on its efficacy and recommendations for the most efficacious approaches to SLHs. Such approaches include how to best structure the home, the home’s location in the community, and lengths of stay.

SLHs have existed as a recovery option since the 1970s, yet they have been largely ignored in the addiction and criminal justice literatures, that is until these recent investigations by our team at ARG (e.g., Polcin, 2006, Polcin et al., 2010).  Beginning in the early 2000s, Doug Polcin began examining SLHs and what should be considered when doing this research, such as general outcomes for those who stay at SLHs, characteristics of individuals with the best outcomes, and recommendations for lengths of stay. Rachael Korcha, and Amy Mericle later joined the research team at ARG that has been examining these homes as a recovery residence option.

What are some of the outcomes from research on SLH?

The SLH team at ARG is contributing to this knowledge by conducting research on SLHs. Through studies of SLHs, preliminary data based on a sample of 300 individuals entering 16 SLHs in Northern California showed resident improvement in a variety of areas, including drug and alcohol use, employment, psychiatric symptoms, and arrests (Polcin et al., 2010).  Improvements in drug and alcohol use and severity were made and maintained 18-months after initial entry into the SLH.  Average length of stay was approximately 3 months with longer lengths of stay associated with the most significant improvements.

Polcin, D.L. (2006, June). What are “Sober Living Houses” and who benefits from them? Poster presented at the Research Society on Alcoholism, Baltimore, MD.

Polcin, D.L., Korcha, R. & Bond, J. (2007, July). Who Receives Confrontation in Recovery Houses and when is it Experienced as Supportive? Poster presented at the Research society on Alcoholism, Chicago, Illinois.

Polcin, D.L. (2009, October) Keynote address: What are we learning from research on sober living houses, and where do we go from here? The Southern California Recovery Summit. Loyola Marymount University Addiction Counseling Program. Los Angeles, CA.