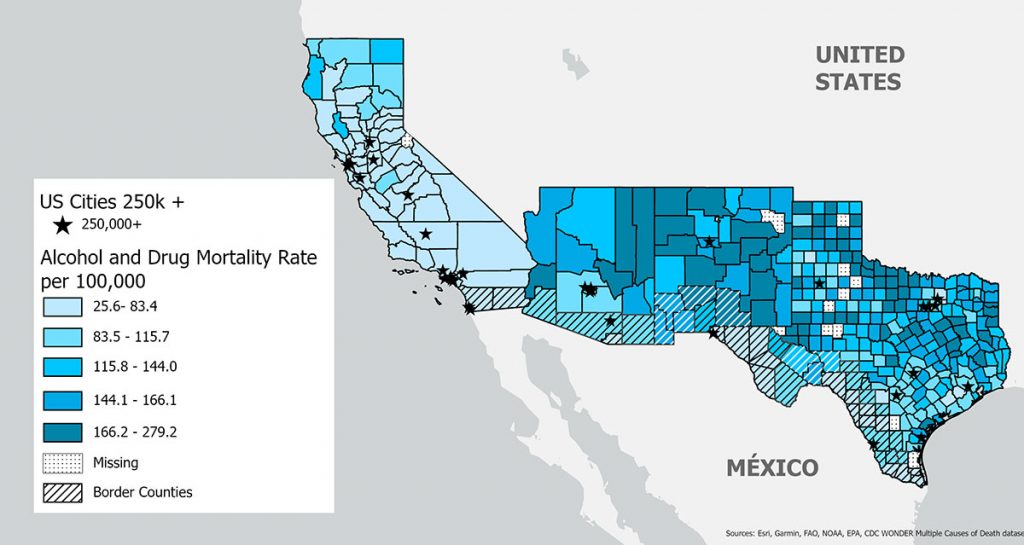 The study used mortality data from the 2008-2017 Centers for Disease Control and Prevention WONDER Multiple Causes of Death dataset. Data from California, Arizona, New Mexico, and Texas were included in the analysis. Counties were designated as border counties if they fell within the US-Mexico border region, defined in the La Paz agreement as the area within 100 kilometers north and south of the international border.

“Interestingly, these findings are consistent with other research suggesting that greater proximity to the border is related to a longer lifespan. While we don’t yet know what is driving this pattern, it may be that norms and practices common in border communities are especially supportive of a healthy lifestyle.  Border communities are heavily immigrant communities, and Latinx immigrants tend to have healthier habits than US-born Americans with regard to alcohol, drugs, and diet.  Perhaps immigrant cultures are a positive influence on health in the border region.”

Results point to the need for further research to determine the causal factors that contribute to these differences and for accessible substance use treatment services in areas both on and off the border, to ensure people receive appropriate and effective support.

The study “Alcohol- and Drug-Related Mortality Among Adults Within and Outside the U.S.-Mexico Border Region” by Sarah E. Zemore, Libo Li, Kara Bensley, Katherine J. Karriker-Jaffe, and Cheryl Cherpitel is available online.

About the Alcohol Research Group

For over sixty years, the Alcohol Research Group (ARG) has been actively engaged in critically needed alcohol- and other drug-related public health research. We study drinking and other drug use and how these and other factors such as gender, race/ethnicity, sexual identity, socioeconomic disparities, and environmental differences affect health. ARG is also home to the NIAAA-funded National Alcohol Research Center and training program. Please visit arg.org.

ARG is a program of the Public Health Institute, an independent nonprofit organization, dedicated to promoting health, well-being and quality of life for people throughout California, across the nation and around the world. Please visit phi.org.