According to a new national study, 7.4 percent of surveyed respondents reported that children in their care experienced harm as a result of someone else’s drinking.  By comparison, previous studies in the U.S. have found general child maltreatment rates to be approximately 1 to 2 percent.  The results were published online in the Journal of Pediatrics.

Respondent caregivers who experienced alcohol’s harm from a spouse or partner, or if they lived with a heavy drinker, were almost four times more likely to report harms to children.

The most common alcohol-related harms children experienced were verbal abuse and witnessing violence, with the least common being a call to Child Protective Services (CPS) according to the respondents. Additional harms measured were physical abuse, the child being left unsupervised, and a lack of money to meet the child’s needs. 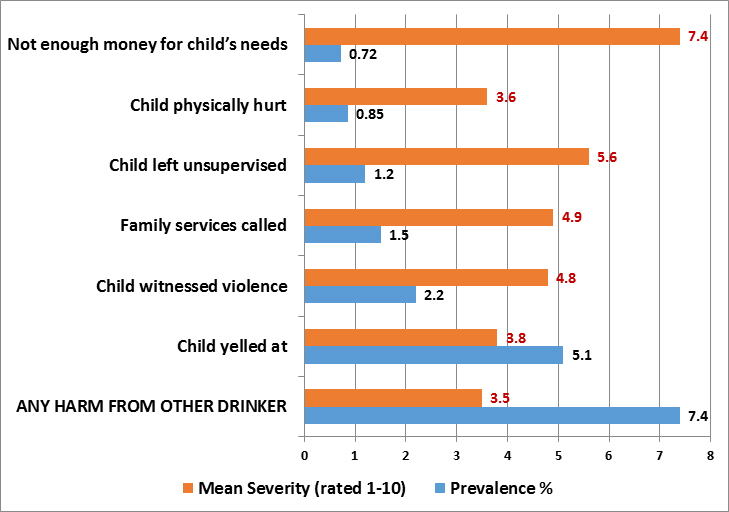 “Our study indicates child maltreatment data might be missing broader impacts of harms resulting from a person’s drinking,” said lead author Lauren M. Kaplan. “Findings showed that less than two percent of caregivers reported calling family services, which suggests other studies are underestimating harms when CPS is not involved.”

Surveyed caregivers also reported that the most likely perpetrator was a parent (parents, step-parents, and guardians together made up more than 55% of those responsible for alcohol-related harms to children), while other relatives accounted for almost a fifth of reported harms.  Other perpetrators included siblings, other relatives or a family friend.

“Physicians or other health care providers seeing children often do not ask caregivers about their partner’s or spouse’s drinking. Our results indicate the majority of alcohol-related harms are caused by people close to the child,” said ARG scientist and co-author Madhabika B. Nayak. “These findings will provide clearer guidance for clinicians to assess children’s risk for alcohol-related harms potentially stemming from the caregiver as well as from partners or other heavy drinkers in the family.”

Researchers analyzed data from the National Alcohol’s Harm to Others Survey (NAHTOS) conducted in 2015, which included 764 respondents responsible for the care of at least one child.