AS OCTOBER USHERS in National Breast Cancer Awareness Month, the social media campaign Drink Less for Your Breasts stands out like a red flag against a cheerful tide of pink ribbons, especially the ones printed on labels of alcoholic beverages. This is the time of year when some craft brewers tint their beer pink, and rosé bottles and cocktail menus display the iconic ribbon, touting companies’ donations to breast cancer organizations. Drink Less for Your Breasts reminds women that alcohol actually contributes to breast cancer risk.

The social media campaign, which just relaunched after its debut in February, targets young women and appears to be the first of its kind in the US. One video, featured in a Facebook ad, shows a young woman dancing in a nightclub with a cocktail in her hand. She smiles as she heads for the restroom to take a break, but when she looks in the mirror, instead of her bouncy dark curls, she sees a somber, bald version of herself with an IV pole and drip bag. Horrified, she reaches up to touch her hair as her reflection reaches through the mirror and puts her hand over the cocktail glass. “Alcohol increases your risk of breast cancer,” a female announcer intones. “Drink less for your breasts.” 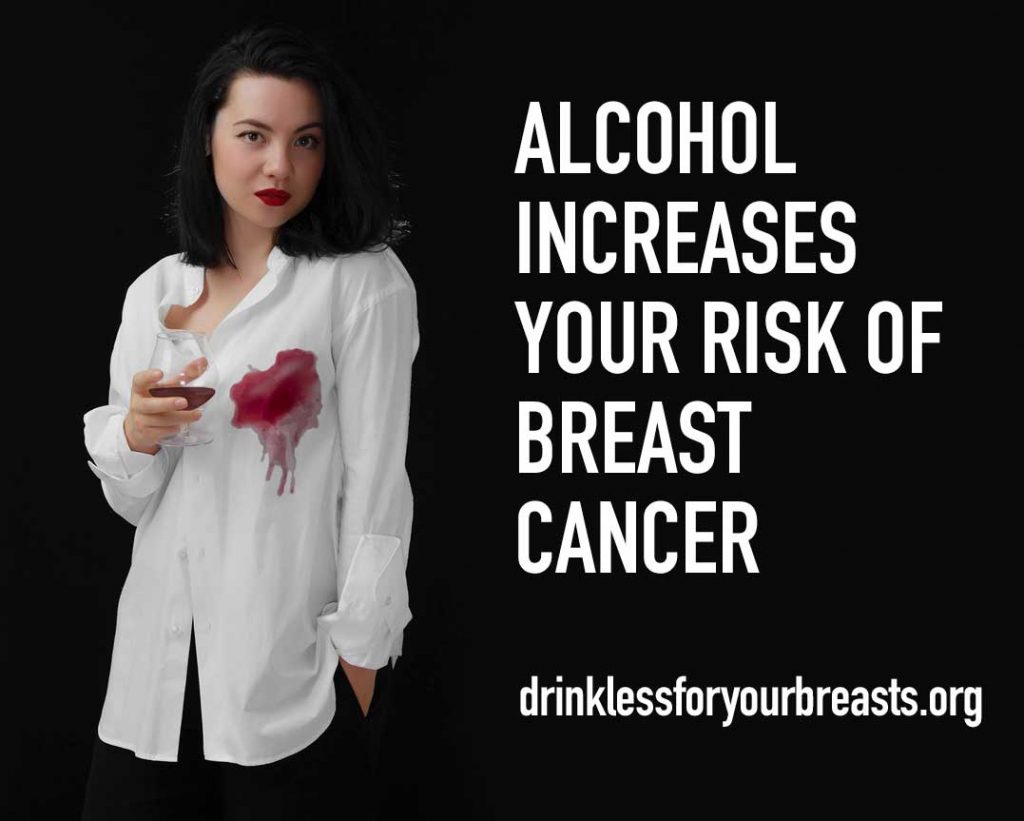 The campaign is also designed around “edu-grams,” or educational Instagrams, which relay sobering information to urge women to cut back, then links to the campaign website for more details. There’s no specific limit for what “less” means, and no push for abstinence, but based on past epidemiological studies, the Drink Less campaign estimates that over time even one drink a day—the limit recommended by US dietary guidelines for women—raises breast cancer risk by 14 percent. (An individual’s overall risk is shaped by other factors as well, so that increase would be more significant for a person with a family history of breast cancer. And it’s important to note that cisgender women are not the only people who can develop breast cancer; so can transgender and nonbinary people, and cisgender men, although men’s overall risk is much lower and the link with alcohol is less clear.)

The group’s website provides the definition of one drink: 14 grams of alcohol, which typically means one 12-ounce beer, one 5-ounce glass of wine, or a 1.5-ounce shot of spirits, such as gin or whiskey. A stronger craft brew or a heavier pour of alcohol counts as more than one drink. The campaign’s takeaway is posted on their website: “You can’t control things like being born female, or your genes, or when you got your period—all things that increase your risk of breast cancer. But you can control how much you drink. So why not control what you can?”

According to a 2020 analysis of a Centers for Disease Control and Prevention survey, only about one in four women ages 15 to 44 knows that alcohol is a risk factor for breast cancer. Priscilla Martinez, who is leading the Drink Less campaign, would like to change that. “My goal was to prevent a young woman of today who uses alcohol, like many women do, from finding out in 20 years that she has breast cancer and wondering why,” says Martinez, a public health researcher who typically studies racial and ethnic health disparities related to alcohol at the Alcohol Research Group, a nonprofit based in Emeryville, California. “To me, it’s also an equity issue. Society has this information about a potential consequence of this behavior, and the women at risk don’t know about it.”

About 250,000 US women received a breast cancer diagnosis in 2018 (the most recent statistic), and 42,465 died of it. That makes breast cancer the second most common cancer (after skin cancer) and the second deadliest (after lung cancer) in women.

In a 2021 paper published in the journal The Lancet Oncology, researchers from the International Agency for Research on Cancer (IARC) in Lyon, France, calculated a “global burden of cancer in 2020 attributable to alcohol consumption” based on prior research on alcohol-linked cancer risk, per capita alcohol consumption, and country-specific data on cancer cases. By their estimate, 14,000 new cases of breast cancer diagnosed in the US in 2020 could be attributed to prior drinking.

Research shows that overall cancer risk rises with heavier drinking, even for women who don’t drink every day. Binge drinking—four or more drinks at one sitting—is, in itself, associated with higher breast cancer risk.

University of Wisconsin oncologist Noelle LoConte has long felt that the link doesn’t get enough attention—even among oncologists. She is the lead author of a 2017 statement on alcohol and cancer from the American Society of Clinical Oncology, which calls on these specialists to take the lead in addressing “excessive exposure to alcohol” through education, advocating for policy changes, and research.

Alcohol raises the risk of head, neck, esophageal, liver, and colorectal cancers, in addition to breast cancer, likely due to the way it is metabolized, the statement explains. Ethanol undergoes a biochemical reaction that produces acetaldehyde, which is then broken down by another enzyme called aldehyde dehydrogenase and excreted from the body. Some people, particularly those of East Asian descent, have a less active form of the enzyme, which allows the acetaldehyde—a probable human carcinogen—to circulate longer in the body, potentially putting them at greater risk of cancer. Acetaldehyde can damage DNA, causing changes that can lead to cancer.

“Women need to know this,” says LoConte. “They need to make choices with the right information.”

The American Cancer Society recognizes the link between alcohol and breast cancer, and so does a surgeon general’s report on addiction. The alcohol industry doesn’t dispute it, either. “Many lifestyle choices carry potential risks and the consumption of alcohol is no exception,” a spokesperson for the Distilled Spirits Council wrote in an email response to WIRED.

“Cancer is a complex disease,” the response continued. “Studies have found that excessive drinking is associated with an increased risk of certain types of cancer, and some have also reported an association between moderate alcohol consumption and an increased risk of breast cancer.  Women who have questions regarding alcohol consumption should speak with their physician who can determine what is best for them based on individual risk factors, such as family history, genetics and lifestyle.”

The Drink Less campaign is funded by the California Breast Cancer Research Program, a state program funded by a tobacco tax and donations. In 2019, its policy research advisory group decided to target awareness of alcohol as a risk factor for breast cancer in young women. They requested a bid for a project from Peggy Reynolds, a cancer epidemiologist at UC San Francisco, and she reached out to the Alcohol Research Group to plan and run the project. (ARG is part of the Public Health Institute, a nonprofit with a broad mission to advance global public health.)

Martinez had never organized a social media campaign and doesn’t consider herself social media savvy. But after ARG won the $100,000 grant, she was running focus groups, coordinating an advisory group of cancer organizations, building a team of co-investigators and partnering with the ARG communications specialist. “The young women made it very clear they did not want to be told what to do,” Martinez says of the focus groups. “’Drink less for your breasts’ felt more like a helpful suggestion.”

Planning for the social media campaign began just as the pandemic forced a national shutdown. As the pandemic dragged on, alcohol consumption rose, especially among women. Days of heavy drinking among women, defined as four or more drinks within a couple of hours, rose by 41 percent, according to a survey by the RAND Corporation. (The study compared a baseline survey of 1,540 adults conducted in the spring of 2019 with their responses during a follow-up in the spring of 2020.)

But pushing back against alcohol consumption isn’t simple. As the US found during a disastrous prohibition period from 1920 to 1933, opposing alcohol is not popular. When Sharima Rasanayagam, chief scientist for Breast Cancer Prevention Partners in San Francisco, gives talks about environmental causes of breast cancer, her audience is rapt—until she mentions alcohol. “People like to drink and they don’t like to hear that,” she says. She tells them that quantity matters: “At the very least, drink less.”

It’s a message she delivers with care, to avoid giving women a reason for self-blame if they develop breast cancer and wonder “Why me?” Cases of breast cancer can’t be tied to alcohol alone, because many factors, including genetics and environmental exposures, contribute to the disease, she explains in a YouTube video linked to the Breast Cancer Prevention Partners website. But Rasanayagam notes that risks add up—and alcohol is one that women can reduce. Fewer drinks, whether over time or in one day, mean less exposure to acetaldehyde and potentially less effect on estrogen. “It’s been shown that the less you drink, the lower your risk,” she says. (Breast Cancer Prevention Partners is an advisor to the Drink Less for Your Breasts campaign.)

It’s a nuanced message but, in its own way, a bold one, as framed in a social media campaign, says David Jernigan, an alcohol policy expert at Boston University, who has been working in the field for 35 years. “What Priscilla is doing in California is groundbreaking,” he says.

Jernigan asserts that the harm from alcohol—which also includes drunk driving and an association with violence—warrants a large-scale response similar to anti-tobacco efforts. He notes that in Estonia, a campaign urging “Let’s drink less by half!” actually lowered per capita consumption by 28 percent. (Estonia’s alcohol policy also included restrictions on advertising, more enforcement of driving-under-the-influence laws, higher taxes, and a focus on treatment.)

The World Health Organization is also developing a global action plan; the current draft sets a goal of reducing per capita consumption by 20 percent by 2030 (with 2010 consumption levels as the baseline). It urges nations to develop and enforce “high-impact policy options,” such as higher alcohol taxes, restrictions on advertising, and emphasizes awareness of health risks.

Jernigan calls that effort a good step that doesn’t go far enough. He favors the development of an international treaty on alcohol, similar to the “Framework Convention on Tobacco Control,” the first such negotiated through the World Health Organization. It has been signed by 168 countries that committed to taking steps to restrict tobacco advertising, raise cigarette taxes, and prevent youth smoking.

Consumer advocates also want stronger action. Cigarettes carry strong health warnings, and a Food and Drug Administration rule taking effect next year seeks to ramp up their impact with graphic images of people with tobacco-linked diseases. Alcoholic beverage labels currently warn pregnant women of the risk of birth defects and carry the statement: “Consumption of alcoholic beverages impairs your ability to drive a car or operate machinery, and may cause health problems.” (There’s no mention of cancer.)

The Consumer Federation of America and seven other advocacy organizations (including Breast Cancer Prevention Partners and the American Society of Clinical Oncology) petitioned the US Department of Treasury’s Alcohol and Tobacco Tax and Trade Bureau in 2020 and again in 2021 for another warning: “According to the Surgeon General, consumption of alcoholic beverages can cause cancer, including breast and colon cancers.” The change would need to be approved by Congress. (Advocates also wrote to the surgeon general, Vivek Murthy.)

So far, there’s been no response to the petition, but Thomas Gremillion, director of food policy for the Consumer Federation, remains hopeful. “We’re not restricting anyone’s rights,” he says. “We’re just giving consumers the right to know.”

That is Martinez’s mission, as well. She will work to spread that health message during October, when breast cancer is in the spotlight. Then she hopes other organizations, perhaps advocates for women’s health, will take up the cause. The Drink Less for Your Breasts website will remain up, and the social media content can still be shared, she says. She hopes the pink ribbons that remind women of breast cancer risk will also make them think twice before they lift a glass of pink beer.